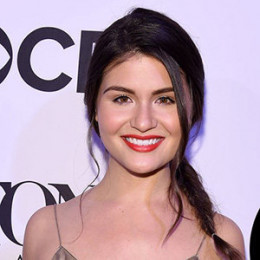 An American actress and singer, Phillipa Soo is currently married. She married to actor Steven Pasquale in 2015. Soo is widely known for originating the role of Elizabeth Schuyler Hamilton in the Broadway musical Hamilton. Soo graduated from The Juilliard School's acting program in 2012. She appeared a small supporting role as Nia in the 2014 television "pilot Dangerous Liaisons" but it did not get picked up to series.

Phillipa Soo was nominated for the 2016 Tony Award for Best Actress in a Musical. Soo is set to next appear in the title role of the new musical "Amelie". She got married to actor Steven Pasquale in 2015. He is best known for his role as the New York City Firefighter/EMT Sean Garrity in the series "Rescue Me". She is very happily living her life with him so there are no signs for divorced.

She got married to actor Steven Pasquale in 2015.He made his debut on the HBO series Six Feet Under, playing a love interest for David.