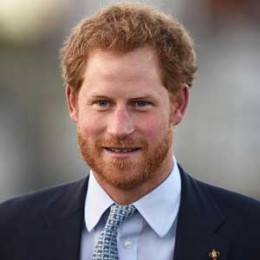 Synopsis Prince Harry is the fifth in line to the throne and well known as the younger son of Charles, The Prince of Wales and Diana, Princess of Wales. His Royal Highness spent ten years working in the Armed Forces, ending operational duties in 2015. He is a strong supporter of many charitable activities and projects and carries out public duties in support of 'The Queen'.Harry launched the 'Invictus Games' in 2014 and remains a patron of its Foundation. He worked with many organizations, including the HALO Trust, the London Marathon Charitable Trust, and Walking With The Wounded.

Henry Charles Albert David also known as Prince Harry was born on 15th September 1984. He is the second son of Charles, Prince of Wales and Princess Diana. He grew up with his brother Prince William, Duke of Cambridge.

When he started nursery school in London at the age of three, he didn't automatically get on well with the other children and was reportedly picked on by bullies.

He attended Eton College (1998–2003), Royal Military Academy Sandhurst, Ludgrove School and Wetherby School. His parents divorced in 1996, and his mother died in a car accident in Paris.

Prince Harry joined the Royal Military Academy Sandhurst on 8th May 2005, where he was known as Officer Cadet Wales, and joined the Alamein Company.

He visited Nepal on 19th March up to 23rd March 2016 to help rebuild a secondary school with Team Rubicon UK and also visited a Hydropower Project in Central Nepal.

He produced the documentary film 'The Forgotten Kingdom' during his gap year in Lesotho, where he also visited Mants’ase Children’s Home near Mohale’s Hoek.

He was also linked with Cressida Bonas, actress, dancer, and model. The couple was introduced by Princess Eugenie in May 2012. On 30th April 2014, it was announced that the couple had parted ways amicably.

In August 2012, Prince Harry became the subject of many news stories after the nude photos of his royal was leaked to the public.

In 2016, he underwent a public HIV test at Guy's and St Thomas Hospital', to raise awareness and promote how easy it is to get tested. He is also training with the Australian SAS in Western Australia.There were also rumors surfacing that Harry was the son of James Hewitt, a person whom his mother had an affair, but those rumors were dispersed after a while.

On 8th November 2016, Kensington Palace confirmed that Prince Harry was in a relationship with Meghan Markle, an actress, humanitarian, and activist. The relationship between this couple resulted becoming Google's most searched of 2016.

The couple first met in 2016 in Canada, where Meghan was shooting for her series, 'The Suits' and Harry was there to promote Invictus game.  According to the sources, they both were awestruck by each other and exchanged number right away. The couple has been inseparable since then.  For a while, they decided to keep their relationship private, dropping few hints now and then about their status in social media.

The media scrutinized their relationship and harassed Meghan, leading Kensington Palace to release a statement about it. The couple now resides in Toronto, and there have been rumors surrounding their marriage. The rumor has it that Harry and Meghan are ready to tie the knot soon.

Prince Harry has a net worth of approximately $20 million though some estimates are far higher. However, we will never find him on a Forbes list because much of the wealth is not his to use freely but comes with his position as a member of the royal family.