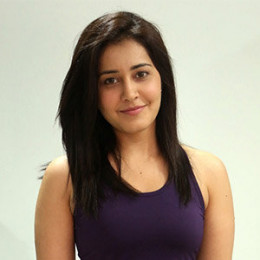 Tollywood actress and model, Raashi Khanna debuted her Hindi film in "Madras Cafe" and made her debut in Telugu with "Oohalu Gusagusalade" (2014). In late December 2014, she was signed opposite Ravi Teja for the film "Bengal Tiger," which was directed by Sampath Nandi. In 2016, Raashi signed two Telugu films "Hyper and Oxygen" and a Tamil film "Shaitan Ka Bachcha," marking her debut in Tamil cinema.

Raashi Khanna made her Bollywood debut in the 2013 Indian political spy thriller film "Madras Cafe," where she played the role of Ruby Singh, the wife of an Indian intelligence officer Vikram Singh portrayed by John Abraham. Some of her popular film credits include Manam (2014) and Shivam (2015) and Oohalu Gusagusalade.