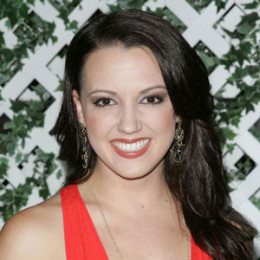 Rachel Potter is an American actress, singer plus song writer who is famous for her Broadway performances in The Addams Family Musical and the revival of Evita. Rachel is engaged to her lover, artist Zach Michael. She is not married yet. Seeing the love and bonding of the couple, they are likely to get married soon.

Rachel Potter was born on August 21, 1984, as Rachel Lindsey Potter. She was born in New Orleans, Louisiana and raised in Seminole Florida. Her mother was diagnosed with Juvenile Diabetes when she was only 12.

After completing her high school education, Potter enrolled at the University of Central Florida and earned the bachelor’s degree in Public Relations and Advertising.

Rachel started writing songs from the very early age. She began her career as an artist when she was 16. In 2002, Rachel released her first album Come back Home, with her own songs. She then got an opportunity to perform in several shows like Walt Disney Worlds, Ariel, Belle, and Nemo.

Potter began her Broadway career in the year 2011. She was also cast in the musical version of The Addams Family.

In 2012, she starred in Roger Ree’s Evita. In the same year, she recorded and released her debut EP, Live The Dream showcasing her pop country sound and songwriting.

Afterward, Porter auditioned for the third season of The X Factor with Somebody to Love. Joining The X Factor not only raised her name and fame. With a lot of hard work, she became a Top 12 finalist on the show. Her rendition of Queen’s Somebody To Love was praised internationally.  While in the show The X Factor she was mentored by Kelly Rowland.

The 33-year-old beautiful singer Rachel is engaged to her boyfriend, Zach Michael. Zach is a musical artist. The duo got engaged in August 2016. They haven’t married yet. However, they were blessed with a child named Jude on December 13, 2016.

The versatile personality Potter earns a lucrative amount from her career. She has accumulated an estimated net worth of $ 1.4 million. She certainly lives a luxurious life along with her family.

Jude is the only child of Rachel Potter with her fiance Zach Michael. He was born on December 13, 2016.