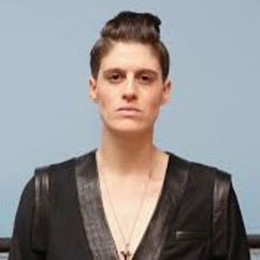 Rain Dove is one of the top most models who gained popularity walking the runway in both menswear and womenswear. She is an Androgynous model plus social media influencer. With her success, she proved that cisgender is not the hindrance but the blessings only a rare can have.

Rain Dove is from America. She earned a degree in genetic engineering and civil law at the University of California, Berkeley.

She had a lice problem when she was young and when her mother cut all her hair everyone assumed she was a boy. She was brave enough to face the criticism from the society regarding her appearance and gender while growing up.

Prior to modeling Dove worked as a firefighter in Colorado under a male pseudonym. She went to open casting call where the door of modeling opened up for her. She then began to model menswear for Calvin Klein. Reportedly, she lost the bet to a model friend on a Cleveland Browns football game which left her no choice but to go on the open cast.

In the modeling field, Rain worked alongside androgynous fashion model Andrej Pejic. She has worked with the brands like Ace Rivington.

As a result of gender "capitalism", she got an opportunity to feature in popular magazines such as Elle, People, and on BuzzFeed. She also participated in the Queer Fashion Week in Oakland, California.

Recently, she walked on the show of Loris Diran for Men’s New York Fashion Week. Being in the fashion world was like a challenge, adventure and reward at the same time for her. Through her career, she successfully changed the views of people towards the gender stereotype.

Besides a great model, Dove is also an activist. She volunteered for various non-profit organizations including Feed America.

Rain is in a romantic relationship with Sierra Jiminez. Sierra is a reporter and met Dove while taking her interview. They are seen hanging out with each other most of the time.

Jiminez also stated that she loves the time spent with Rain. However, the duo hasn’t officialized their relationship status till date.

Talking about her earnings, Dove makes a huge amount, working for famous brands such as BuzzFeed, Elle, and many others. Her social followers on Instagram has increased massively and reached more than 150, 000. She is the owner of the loft called Roxbury Studios which she rented out to the low-income artist. Her net worth must be not less than six figures.