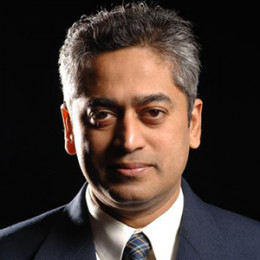 Rajdeep Sardesai is an Indian author and news anchor. He was born to father Dilip Sardesai, a professional cricketer who was formally in the Indian test cricket team, and mother Nandini Sardesai. Rajdeep worked with The Times of India and entered television journalism as political Editor on New Delhi Television. He covered major national and international stories, mainly focusing on national happenings during his career.

Rajdeep Sardesai got married to his fellow broadcast journalist and anchor, Sagarika Ghose who has worked with the Outlook magazine. They have two children, a son, and a daughter. Rajdeep faced the controversy while writing about Narendra Modi,’’loves the camera’’. Before Modi became Gujarat chief minister, Rajdeep had blamed Modi for the violence. Sardesai is the winner of Padma Shri for Journalism, Ramnath Goenka Excellence in Journalism, and the Asian Television award.

Rajdeep Sardesai is married to Sagarika Ghose, an Indian journalist, author, and an anchor. She has worked with The Times of India, Outlook, and The Indian Express. They have two children together.

Ishan is the first son of Rajdeep with Sagarika. He is studying MBBS and is considered excellent with his studies.

Tarini Sardesai is the youngest member of the Sardesai family. She resembles her mother in the pictures available on the internet. There is not much information disclosed about her.