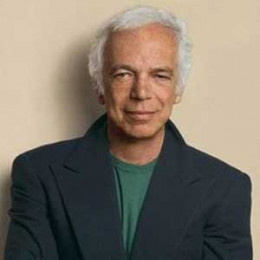 Ralph Lauren is one of the known figures of today. He studied business science and served time in the army before beganing a career in fashion.Lauren changed his surname when he was a teenager. He also worked as a sales assistant before he launched his own clothing line.

Ralph Lifshitz is known as Ralph Lauren, an American fashion designer, Philanthropist, and business executive best known for the Ralph Lauren Corporation. He was born on  October 14, 1939, in The Bronx, New York, the US to mother Frieda Cutler and father, Lauren Lifshitz.

Ralph was raised with his two brothers and one sister. Lauren and his older brother changed their surname Lifshitz to Lauren in their early age because their classmates teased them by their last name.

Lauren attended day school followed by MTA(now known as the Marsha Stern Talmudical Academy) and eventually graduated from Dewitt Clinton High School in 1957. He studied business science at Baruch College at the City University of New York(CUNY)but dropped out after two years.

Lauren served in United States Army from 1963 and in 1964 he left to work for Brooks Brother as a sale assistant. At 28 years old, Lauren served for the manufacturer Beu Brummell, where he convinced the company's president to let him start his own line.

As Ralph was interested in sports, Lauren named his first line of menswear 'Polo' in 1968. He worked out of the single drawer from a showroom in Empire State Building and made deliveries himself.

Ralph Lauren married Ricky Ann Lo-Beer on December 20, 1964, in New York City. The couple met at a doctor's office where Ricky worked as a receptionist. They Have three children together two sons Andrew Lauren(b.1969), David Lauren(b.1971), and daughter Dylan Lauren(b.1974).

Lauren elder son Andrew is a film producer and actor. His younger son David is Executive Vice-president of Global Advertising, Marketing, and communicators at Ralph Lauren Corporation and is married to Lauren Bush, the granddaughter of former U.S President George H.W Bush. Ralph's daughter Dylan is the owner of Dylan's Candy Bar in New York.

Ralph Lauren is a business executive, who is known for Ralph Lauren Corporation, a global multibillion- dollar enterprise. As of 2017, his net worth estimated at around 6 billion USD.

Ralph Lauren married Ricky Ann Lo-Beer in New York City. The couple met at a doctor;s office where Ricky worked as a receptionist. They have 3 children together. Two sons and one daughter.

Andrew is the first child of Ralph Lauren and his wife Ricky. Andrew is a film producer and actor.

David is the second child of Ralph Lauren and his wife Ricky. David is Executive Vice President of Global Advertising, Marketing, and communicators at Ralph Lauren Corporation. He married Lauren Bush, the grand daughter of former President George H.W Bush.

Dylan Lauren is the third child of Ralph Lauren and Ricky. She is the owner of Dylan's Candy Bar in New York City.