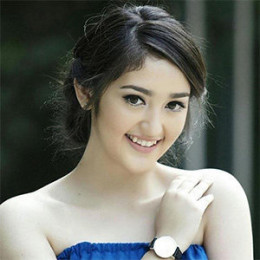 An Indonesian actress, ranty Maria is known after starring in soap operas "Waiting Miracle of Love" production SinemArt along with two colleagues, Chelsea Olivia and Glenn Alinskie. She is the daughter of Joanita Kariso and Lee Ki Young. ranty Maria also appeared in Heart Series, Son Not Crazy, Do not marry me I Still Want To Play, My Love and Love is Love.