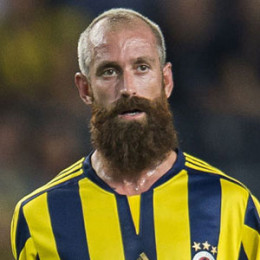 Raul José Trindade Meireles is a well talented Portuguese football player who plays for the Portuguese national football team and for the Fenerbahce in the Turkish Super Lig as a central defender. His father name is Raul Meireles, Sr.,who was a massage therapist from Boavista FC and encouraged him to play soccer. He started his football career as trainee with Boavista. He is known as a versatile player for his stability and ability to play both a deep and attacking role.

He is a tattoo lover since he was a teenager and has a lot of tattoos in different parts of his body. He married a beautiful lady with whom he dated for a long time and finally got married at Martim Church in Barcelos, among various popular faces. He also has a cute little daughter whom he loves so much that he has her tattoo in his body. He has some football transfer rumor recently and he is supposed to leave the recent club.

He is happily married to his love and is enjoying his time with her. She is also a tattoo lover.

She is a beautiful and the only daughter of Raul and Ivone.