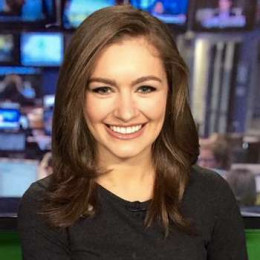 She is an American journalist, currently working as a national political reporter for RealClearPolitics. She is a former political correspondent of The Washington Examiner and Capitol Hill reporter for BuzzFeed. Also she was a political reporting fellow at The New York Times but before that, she worked as an online editorial intern at New York magazine. She graduated with a BA in political science from the University of Missouri in 2011.

Rebecca Berg is in a romantic relationship with her boyfriend Brendan Buck. Till now she hasn't shared any personal information to the media as she is very conscious in this matter. Above all, being so gorgeous and popular, she might have been dated many handsome hunks in past and had breakups too. We can know her in a better way simply by following her on Twitter @rebeccagberg.

Rebecca Berg was born on January 17, 1990, in the USA to Kris and Steven Berg. Her ethnicity is White-American and nationality wise she is an American.

She was raised in San Diego along with her sister, Emily. Her father was city planner and then worked at a real estate brokerage founded by her mother.

Berg has earned her bachelor's degree in political science from the University of Missouri in 2011. After graduating in Political Science she started working as an intern at St. Louis Post-Dispatch and the New Yorker.

She also interned at New York Magazine on Online Editorial Internship for five months completing in 2012. The events of September 11 and the presidential election of 2008 inspired Rebecca to pursue her career in journalism.

Berg started her career in 2012, she served as a political reporting fellow for the New York Times. The same year, she started writing for the BuzzFeed. In 2013 to 2015, she used to wrote for the Washington Examiner.

In 2015, Berg joined RealClearPolitics national political reporter and covered the United States presidential election, 2016. During the election time, she was named a political analyst for CNN. She also had appearances on other networks, such as; Fox News, MSNBC, CBS, and C-SPAN.

Rebecca is very open up about her relationship status. She is dating Brendan Buck since a long time but the duo hasn't revealed the exact date of their first encounter. She often shared her partner pictures on social sites, especially on Instagram.

Her boyfriend is a Chief Communications Advisor based in Washington D.C. They are in a live-in relationship and didn't want to get married soon as they aren't ready for the commitment as husband and wife.

Rebecca Berg’s past affairs and boyfriend’s, if had, is completely in a shade as she prefers very low interaction with media regarding her private life. She has not involved in any controversy or rumor so far.

Berg has earned a decent amount of net worth from her glorious career but the exact figure is still hidden behind the curtains. She is paid with handsome salary for her work.