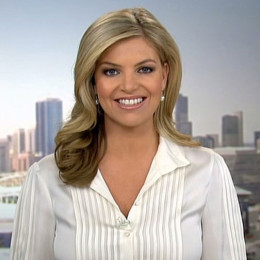 She is an Australian born famous journalist who is also a news reporter as well as a presenter too. She is currently working as a presenter and a reporter on Seven News. She has a degree in Media studies with Politics and Television as major. She was the only daughter in the Maddern Family. Beside working as a reporter, she is also the ambassador of Geelong Cup.

She has been married twice. Due to some problems and misunderstandings, her first marriage was unsuccessful. However, after some years, she married a guy who worked as a cameraman in the same news channel she used to work for. She has not given birth to any children till date. In media, she told that she is not yet ready to give birth or adopt a child.

Rebecca Maddern was born on August 6, 1977, in Geelong, Victoria, Australia. She is the only daughter of her parents and raised along with her 5 brothers.

Her brothers were huge football fans and she also has to watch it though she has no interest. She joined Morongo girls College and completed her schooling.

Later, Maddern attends the Geelong college. In 1995, she joined Melbourne University to studied Arts but shortly after a year, she transferred to RMIT University. She has a degree in Media studies with Politics and television as major.

Rebbeca started her career in radio and later she becomes a sports reporter for Melbourne radio station. In 2001, she began reading the Fox FM afternoon, after a year she moved to Nova 100.

Her television career started with Seven Network and she covered the Victoria’s January 2003 bushfires. In January 2013, Maddern returned to present Seven Afternoon News and after a year she joined Sunrise.

In November 2016, Maddern was selected as the host of Australian Ninja Warrior which aired in July 2017 on the Nine Network.

Maddern is a married woman, she exchanged a vow with Trent Miller, seven News cameraman. The duo wedding took place in March 2014 at an intimate ceremony. Currently, her husband served as cameraman for GTV-9 whom also provides his services to the AFL Footy Show.

Previously, she was married to Geelong real estate identity James Wilson in October 2006. However, the couple couldn't their relationship a and had divorced. The former couple hasn't any child together. In 2007, she was the ambassador for the Geelong Cup.

Rebecca and Trent are living a blissful married life and couple is still not ready for having babies as they are career oriented. In 2007, she was the ambassador for the Geelong Cup.

Rebbeca Maddern has earned a quite impressive net worth from her career but due to her secretive nature, she hasn't revealed the concrete figure of her net worth. However, it is assumed to be in million of dollars.

He was long time boyfriend of Maddern. He works as Geelong real estate identity. After some years of their marriage due to some problems couple splits up.

He used to work as cameraman in seven news channel too. After her divorce they started dating and finally in 2014 they got married.