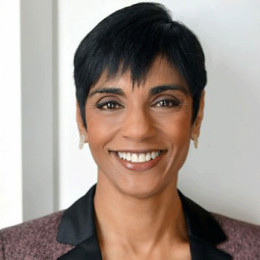 She is a political correspondent and presenter for BBC News. She is born to Indian Bengali family. She holds degree in English and French from Exeter College, Oxford. She started her career as a reporter for the Breakfast Programme on the newly launched BBC Radio Five Live in 1994. In 1997, she was promoted to BBC Community Affairs correspondent. Recently, she was appointed as a presenter and reporter on BBC1. Beside that, she has also hosted award functions like 2003 and 2004 Educational Television Awards Dinners.

Reeta Chakrabarti was born on December 12, 1964, in Ealing, London to an Indian Bengali family. She was raised in Birmingham and she also attends the school at Calcutta International School in Kolkata. Regarding her nationality, she is British and belongs to the Indian-British ethnicity.

Chakrabarti completed her graduation from Exeter College, Oxford in 19888 with a degree in English and French. She also spent a year in a France during her educational period.

Chakrabarti started her professional career since the 1990s, she was hired as a reporter for the Breakfast Programme on BBC Radio 5 Live in 1994. Later, she worked as a general news correspondent on both TV and radio.

In 1997, she was prompted by BBC Community Affairs correspondent and she covered the  Stephen Lawrence Inquiry and also working on Home Affairs. Chakrabarti has served in BBC One, BBC Two, the BBC News Channel, BBC Radio 4.

Apart from journalism, she hosted a number of corporate events such as 2003 and 2004 Educational Television Awards Dinners for the Royal Television Society.

Reeta Chakrabarti, 53 is a married woman and she is the mother of three children. However, due to her secretive nature, she hasn't disclosed any kind of information regarding her husband and kids to the public. The couple has maintained the very healthy relationship between them. According to her, both of them are very supportive of each other. The family resides happily in North London.

Chakrabarti is a huge fan of poet John Keats and chose that topic as her specialist subject on the BBC television quiz Celebrity Mastermind on December 22, 2016.

She is associated with many social causes including, patronage of the Naz Project, an HIV/AIDS charity focusing on minority groups affected by the disease, and of the National Mentoring Consortium as well as she is the Patron of Pan Intercultural Arts.

Reeta Chakrabarti is one of the successful females journalists who is popularly known for her association with BBC. She served in BBC since 1994 and she paid handsomely for her contribution.

The average salary of BBC employee is more than £36,000 and she also gets paid around this figure. Chakrabarti hasn't revealed the exact figure of her net worth but as per some online sources, her net worth is not less than a seven-digit number.