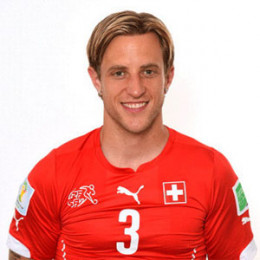 Reto Ziegler was born on 16 January 1986 in Geneva, Switzerland. He began showing his interest in football since his early age, as he started his career by joining Tottenham.

He began his career in the summer of 2004 signing with Tottenham Hotspur, with a contract meant to start on 1st January 2005, after his contract with Grasshopper lapsed but joined in the late August 2004 after then then-Tottenham sporting director Frank Arnesen.

Despite being young of eighteen years, he made his debut and became one of the important members of the team under two coaches Jacques Santini and Martin Jol.

Overall Reto featured in 31 games in every competition, including 23 games in Premier League. He showed great effort and improvement, which made him popular with the fans for his attack-minded play.

Later in 2005, Ziegler was sent on loan to Hamburger SV of German Bundesliga, where he played in 11 matches including three UFEA Cup games. However, he was criticized by manager Thomas Doll for a weak attitude and played just for few minutes in every game.

Afterward, in 2006, he returned to Tottenham for a year. He played four games, including UFEA Cup against Salvia Prague, and Carling Cup against Mk Dons, also as a substitute appearance opposed to Manchester United in the league.

On 18th Feb 2007, he played his first Serie A match for Sampdoria against Parma; he scored the first goal in his 10th Serie A appearance against Messina on 21st April.

He played various games during his contract period and made his mark. Since his contract expiry date was on 20 June 2011, he was also linked with A.C. Milan, as Sampdoria opted to gain some cash. But, Ziegler did not leave.

Later, on 26 May 2011, Reto joined Juventus with a four-year contract, as he passed his medical on 25th May.

But, the same year after a month, Fenerbahce announced that there is a discussion going on with Juventus and Ziegler about to loan him for the 2011-2012 season. Later, they reached an agreement.

Reto then played for Fenerbahce and scored the first goal of the derby match Galatasaray-Fenerbahce which ended in 1-2.

Ziegler's international career began after he made his debut for Switzerland in 2006 FIFA World Cup qualification game against France, assisting his team in securing a point with 0-0 draw.

He also achieved two more caps before coming out of the frame, sadly was not named to Switzerland's team for 2006 FIFA World Cup.

Ziegler has been honored several times, during his career in various events, including Nationalliga A: 2003, Swiss Cup finalist: 2003-2004, Football League Cup finalist: 2006 and much more.

When it comes to his affairs and relationship, Reto Ziegler has maintained a low profile. Considering his age, currently, he is 31 years old and may be married or dating his girlfriend, but has not disclosed yet.

His brother Ronald is also a professional football player, plays for Swiss side ES FC Malley.

Reto Ziegler earns a decent amount of money from his football career, also from contracts he signs. It is estimated that he makes 1 million Euro per year.