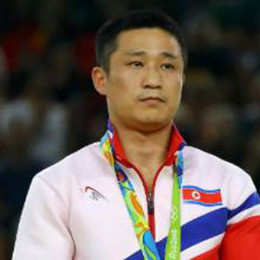 Ri Se-Gwang, 32-years-old, Olympic champion is the North Korean artistic gymnast. He is the first Nort Korean sportsperson to win the gold on vault at the Asian Games. He started his sports career since his early days. In 2014, he won the title of World Artistic Gymnastics Championships by defeating the World and Olympic Champion Yang Hak-Seon.

Ri Se-gwang was born on January 21, 1985, in South Hamgyong, North Korea. He belongs to the Asian ethnicity and holds Korean nationality.

Ri Se-gwang had passion in Gymnastics since a young age. Hence turned his passion into a profession. In 2007, World Artistic Gymnastics Championships he won the bronze medal on vault. Later he won a gold medal at Asian Games and became the first North Korean player to win gold.

Ri won the gold in 2016 Olympics in Rio de Janeiro and made his country proud.

Ri is very secretive regarding his private stuff and prefers to keep his personal life away from the limelight of media which be the reason, he never speaks about his relationship status.

He is at the highest peak of his career. So, he wants to direct all attention towards his career rather than making a girlfriend or being in a relationship.

Ri Se-gwang has earned a decent amount of net worth, but the actual figure hasn't been mentioned, but, it is assumed to be in millions of dollars.