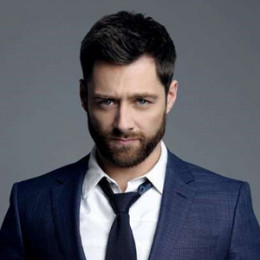 Richard Rankin is a Scottish actor popular for his performance in Burnistoun, Silent Witness, The Syndicate, From Darkness and Thirteen.

Richard Rankin was born Richard Harris on January 4, 1983, in Glasgow, Scotland. He grew up in Rutherglen with his brother Colin Harris. He adopted his name Rankin from his mother’s maiden name. He graduated from Langside College.

Rankin began his career in 2006 with his screen debut in TV show Videogaiden. He then got an opportunity to perform in TV shows such as Legit in 2007, Burnistoun in 2009 and Taggart in 2010. His incredible performance grabbed an attention and soon was cast in BBC’s mini-series The Crimson Field alongside Kevin Doyle and Oona Chaplin.

Afterward, Rankin landed the starring role in the horror film House of Him. The film was premiered at Glasgow Film Festival in 2014. The following year he made his appearance in an array of films and series including Silent Witness, The Syndicate, American Odyssey and From Darkness.

Rankin came to limelight after appearing in the series Outlander as Roger Wakefield in 2016. The same year he was cast in TV drama Thirteen. Recently he was seen in series The Replacement as Ian Rooney.

Besides, Rankin has performed in the theatre shows such as The Lieutenant of Inishmore, The Pillowman, Mary Queen of Scots Got Her Head Chopped Off, Celts in Seville and Black Watch.

The handsome actor Richard is still enjoying his single life. He is quite secretive when it comes to his love and affairs. He was once rumored to be dating his co-star Sophie Skelton. However, they seemed to be more of a friend than the lovers. Even though he is seen hanging out with his co-stars he hasn’t committed himself to the particular one.

The rising Scottish star Rankin earns a lucrative amount from his acting career. Hence it’s a certain fact that his estimated net worth is not less than a million.