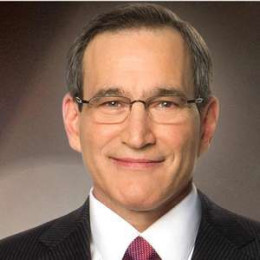 Rick Santelli is an American on-air editor for the CNBC Business News Network. He joined CNBC on June 14, 1999 and he appears 12 to 16 times per day reporting on trading from the Chicago Board of Trade. He graduated from the University of Illinois at Urbana-Champaign. In 1980s Santelli got an up-close-and-personal education in futures trading, foreign exchange and customer relations from his then mentor and employer, RJ Abrams. and has been a member of the Chicago Mercantile Exchange in market that included gold, lumber, CDs, T-bills, foreign currencies, and livestock.

He has been happily married to Terri Santelli and lives with his wife and three daughters in Chicago's western suburbs near Wheaton, Illinois. He has around 20k followers in his Twitter account with zero followings and zero posts. It indicates that he does not love to make post in social networking sites. So it is hard to find the details about his wife and the family.

He has been happily married to his wife Terri Santelli. Together they are parents of three daughters. He has not revealed information about his daughters.