A disability doesn't have to be a social barrier and good etiquette begins with inclusion, not exclusion. This quote is perfectly defined by Canadian YouTuber, Ricky Berwick. Despite being physically disabled he dares to chase his dreams and as of now, he is one of the popular YouTuber with more than 1.3 million subscribers and 239 million+ views.

Ricky Berwick was born on April 23, 1992, in Canada under the birth sign of Taurus. He is the son of Barbara Berwick and Devon Berwick. He was born with a physical disability which limits his movements.

He had a keen interest in making videos from his early days and to give wings to his dream, Berwick stared his self-titled YouTube channel, Ricky Berwick in 2007 but due to poor content, he took a break of nine years. 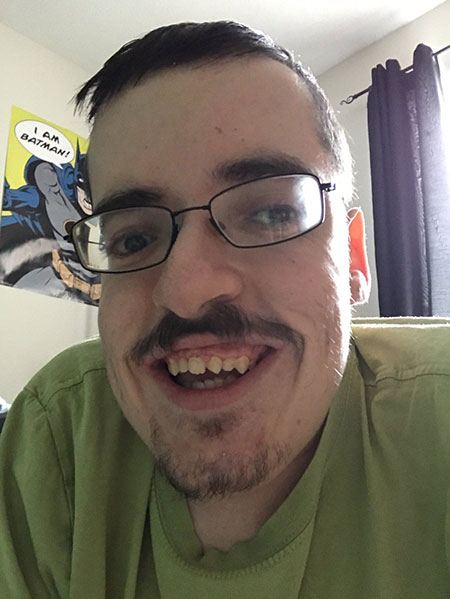 In 2016, Berwick made his comeback to YouTube and started making short comedic videos, as a joke, and out of boredom but it wasn't well received by audiences. Later, he posted a video of him yelling and eating McDonald's french fries on Twitter which soon got viral.

The video was stolen and re-uploaded to Facebook which received millions of views at a short time. Subsequently, Berwick became a popular YouTuber and by 2017 he reached a million subscribers. As of 2018, his channel has 1.31 million+ subscribers along with more than 239 million views.

Ricky Berwick is possibly single at the moment. He is quite ambitious and hardworking and as of now, he is at the highest peak of his career. He has 344k+ followers on his Instagram and 1.3 million followers on Facebook.

Berwick is a popular Canadian YouTuber and has millions of subscribers on his self-titled YouTube channel, Ricky Berwick. He earns $2.3K-$37.3K per month and $28K-$447.8K annually from his channel. Considering his career growth, his net worth is in six digit figure.

Check out the popular video of Ricky Berwick;