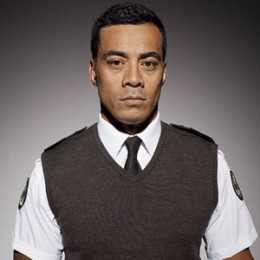 Robbie Joseph Magasiva is a Samoan New Zealand actor and a member of Naked Samoans comedy group. Magasiva is also known for his role on Shortland Street as Dr. Maxwell Avia which he played from June 2009 to July 2012. He has also appeared in television and theater, and was the co-presenter of New Zealand�s Tagata Pasifika with famed athlete Beatrice Faumuina. Robbie resides in Auckland, New Zealand and Melbourne, Australia.

Robbie is the first son of Salafa and Taufaiula Ropati Magasiva and has four brothers, Stevan, Miki, twins Pua ad Tanu and one sister Trina Magasiva. He inspired his brother Pua to become an actor. After leaving school, he gave theater sports a try and acted in some commercials as well as working as a receptionist at an advertising agency.

Magasiva made his debut on television during the 1990s, beginning with comedy. In 1999, he portrayed Mason Keeler in Jackson's Wharf. His first breakthrough came in 2001 when he starred in the movie Stickmen and joined the Naked Samoans. Robbie also featured in the movie The Lord of the Rings: The Two Towers.

In 2006 he co-starred in Sione's Wedding which was a hit in New Zealand. He then co-starred in The Tattooist in 2017. Magasiva also made a minor appearance in Power Ranger: Ninja Storm, in which his brother Pau plays one of the lead characters.

From 2009-2012 he was a cast member of the seriesShortland Street. On October 2012 Robbie joined the cast of Australian drama series Wentworth. He 2016 starred in TVNZ's Dirty Laundry.

Talking about Robbie marital status, Robbie was once married and is now in a relationship. Previously Robbie had tied the knot with Anna Magasiva, whom he met while he was a receptionist. They exchanged vows in 2005 and divorced in 2011.

However, Robbie already had children from his previous affair with Alice Gordon. The ex-couple have two children, Austin born on 1996 and Sophia born on 2000. Both of his children resides in Auckland, and he looks after the kids week on and week off with Alice. But it has not been revealed if he was married to Alice or not.

Currently, Robbie is in a relationship with former Shortland Street alumni, Natalie Medlock and they divide their time in News Zealand and Australia.

Well, the worth of the handsome actor is till under the curtains. But looking at his career he probably has a huge net worth.

Robbie was married to Anna Magasiva, whom he met while he was working as a receptionist.

Sophia is the second child of Alice and Robbie. She has an elder brother named Austin.

Austin is the first child of Alice and Robbie. He was born on 1996 and currently resides in Auckland.