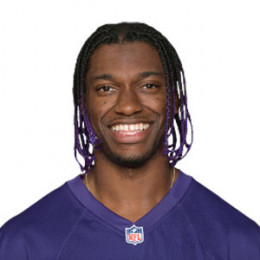 Robert Griffin III is a Quarterback American football player. He won the 2011 Heisman Trophy before being known as a dynamic player for the NFL's Washington Redskins. Robert now plays for the Baltimore Ravens.

Robert Griffin III Personal Life; Who is he Married to?

Robert Griffin exchanged his vows with Estonian-born athlete, Grete Sadeiko on March 10, 2018. They got married in W South Beach, Miami in a beautiful ceremony. The union venue was draped with crystals and illuminated by purple lights to illuminate the beautiful couple even more.

Robert and his wife got married in Miami
SOURCE: People

The couple crossed each other's path back in August of 2016. The lovebirds got engaged in May 2017 after dating for around a year.

MERRY CHRISTMAS from our family to yours #MerryChristmas #HappyHolidays #Smile

Their marriage was short-lived and only lasted for 3 years. The duo also shares one child together. Their daughter Reese Ann Griffin was born on May 21, 2015.

Robert Griffin III commenced his professional sports career in the National Football League as one of the most promising player. Through his astounding career, he collected a massive net worth of $13 million.

Robert has a successful and affluent football career
SOURCE: Celebrity Net Worth

Griffin's base salary is at around $1 million after he was signed by Baltimore Ravens football team in April 2018. The contract also included clauses for allocating a hefty amount of bonus after signing the contract.

Griffin owns multiple houses but out of them, his house in  Loudoun County, Virginia is the most expensive. It is a 6,000-square-foot home with four bedrooms and six bathrooms which the player bought for $2.5 million in 2013. Now the lavish estate is for sale at an astounding price of $2.75 million.

Take a look at Robert Griffin's Net Worth including his family and wives!

The football player also has a fleet of cars to his name. He boasts cars like Bentley, Range Rover, Jaguar, Hummer, and many others. The cars have an estimated accumulative price of about $1million.

Many sports blog even claimed he earned more than any rookie in the NFL history.

Robert's first wife while filing for divorce asked for a lot of dollars which will really put a hole in his pockets. Reports suggest Rebecca sought $36k a month in child support.

Not only that, but she also wants to maintain the former duo's two houses in Virginia and Texas. She even further stated her monthly expenses as follows, $400(for food), $1000(for recreation and entertainment), and $5000(for credit card bills).

Robert Lee Griffin III was born on February 12, 1990, in Japan. He was born to mother Jacqueline (née Ross) and father Robert Jr.

Griffin went to Copperas Cove High School, where he showcased a substantial amount of promise in both the football and track & field programs.

He then attended the University of Houston's Art Briles graduating in Political Science with a prominent place in the college football team as a quarterback.

Growing up, Robert was a huge Denver Broncos and Mike Shanahan fan. Moving towards his religion, Robert is a Protestant Christian.

They got married in W South Beach, Miami in a beautiful ceremony. The union venue was draped with crystals and illuminated by purple lights to illuminate the beautiful couple even more.

The duo got married after dating her for about 4yrs but their marriage was shortlived. They also share a daughter together.

The former couple shares only one child together. Their daughter Reese Ann Griffin was born on May 21, 2015.