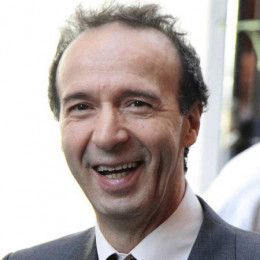 An Italian multi-talented actor, comedian, screenwriter and director who is widely known for his role in the whimsical film Life is Beautiful which lead him to win two precious awards the Academy Award for Best Actor and the Academy Award for Best Foreign Language Film. He was born to Luigi Benigni and Isolina Papini and his family were catholic. He had three sisters. He graduated from Instituto Tecnico Commericale Datini di Prato. In 1971 he started his career in acting by working as theater actor. "Cioni Mario di Gaspare fu Giulia" is one of his theater movie, he directed which was great success. The Monster (1994) and The Tiger and the Snow (2005) are some of popular movie in which he has acted. He is also first actor to win Best Actor Oscar for a non-English speaking role.

He was involved in controversy after he said something impolite in a TV show to Pope John Paul II for which he was censored shortly. Regarding his personal life he is already married to love of his life. Actually she was his colleague. And she has appeared in most of film he has directed. She is very beautiful and together they seem to be very cute couple. There has been no rumor of extra marital affair from both sides. Couple hasn't given birth to any children yet.

They first met each other in Rome's Academy of Dramatic Arts. She is also very successful actress. She has acted in many movie he has directed.