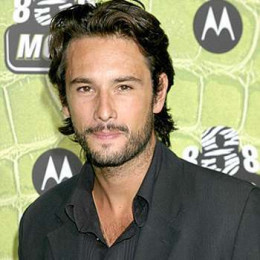 Rodrigo Junqueira dos Reis Santoro is a Brazilian actor, best known for his portrayal as Xerxes in the movie 300 and its subsequent sequel 300: Rise of an Empire. Some of his notable film credit includes I Love You Phillip Morris, Che, Brainstorm, Carandiru, Love Actually and Rio. He was born to Brazilian mother, Maria José Junqueira dos Reis who is an artist and Italian father, Francesco Santoro who is an engineer.

Moving on to his personal life, he hasn't married anyone yet but currently is in a serious relationship with his girlfriend who by profession is a model and actress. The two are dating since 2013 and their relation is going on pretty strong. Before that, he had dated a long list of gorgeous ladies in his past days and was often romantically linked with Gisele Bündchen, Natalie Portman and Jennifer Lopez