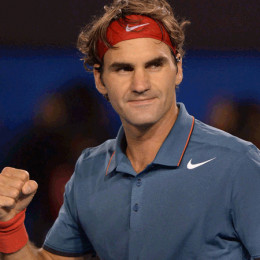 Roger Federer is a professional tennis player who is often cited as one of the best tennis players in the world. He was ranked no.2 on Forbes World's Highest Paid Athletes list. He has signed endorsement deals with Nike and the Swiss companies Rolex, Lindt, Jura Elektroapparate, Nationale Suisse and Credit Suisse From 2005 to 2008, he was named the Laureus World Sportsman of the Year and held the record of world No. 1 position for 302 weeks. H

Till now Roger Federer is married only once and with his only wife he has raised two twins: firstly twin daughters and later twin sons. His wife is a former tennis player, whom he first met while both were competing for Switzerland in the 2000 Sydney Olympics.

They are often seen together at various events and functions and seems like they are totally happy and satisfied with each other so there is no point on their divorce.

Roger Federer has an estimated net worth of $450 million.

Roger Federer is the son of Robert Federer and Lynette Federer.

She is the only wife of Federer, who is a former Women's Tennis Association player. The two were married at Wenkenhof Villa in Riehen near Basel.

She was born safe along with her twin sister Charlene Riva.

She was born healthy along with her twin sister Myla Rose.

He is the twin brother of Lennart.

He is generally called Lenny by his family members.