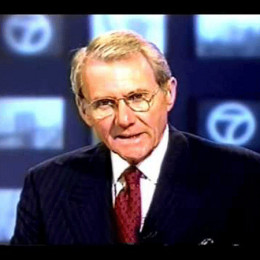 He was a popular television news anchor, American journalist and actor who is considered as pioneers of local television broadcast news. When he was born he was a orphan and he was raised by Lutheran minister. He holds a degree in history from Columbia University in New York. He also served as U.S. Army veteran from where he sparked his interest in news broadcasting. He started his career as an announcer for WEBC Radio in 1954. He has already worked in several broadcasting channels like WEAU-TV Eau Claire, WISC-TV Madison, and WXIX-TV. Beside journalism he is also actor of blockbusters movies like Ghostbusters (1984), Bananas (1971) and The Exterminator (1980). At the age of 66 he died due to lung cancer.

Talking about his relationship status he was married twice. His relationship with his first wife ended shortly after she gave birth to a daughter. After some years of divorce he got married again. They used to stay together in New York city. She was with him till his death. He had no any child from his second wife. Beside his two wives, he has not involved himself in any kind of extramarital affairs.

She is his first wife. She has not been mentioned in most of the internet sites. Together they were parents of one daughter.

She has been supportive to him throughout their marriage relationship. She didn't give birth to any child.

She is the only child of him and is from his first marriage. She is very gorgeous.