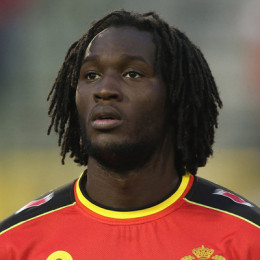 A soccer player who plays as Central Forwarder from Belgium. Romelu Lukaku plays for English club Everton on loan from Chelsea F.C and he is also in the National Team of Belgium. His father Roger Lukaku was also a professional football player who was capped at international level by Zaire. He was greatly encouraged in study by his parents and thus he rejected to transfer Chelsea before he had his school degrees.

Romelu Lukaku's Personal Life: Who Is His Girlfriend?

Regarding his personal life, this tall and physically strong striker is not married yet. There is no record of his girlfriend found in media. This shows he is not interested to disclose his personal life. Regarding his age too, 21 years old player is very young to get married and it will be best if he focuses more on his career rather than other things.

Romelu Menama Lukaku Bolingoli was born on 13 May 1993 in Antwerp, Belgium.

He played in two FIFA World Cups and a UEFA European Championship. He became the joint second-highest goalscorer and won the Bronze Boot at the 2018 World Cup leading Belgium to a third place.