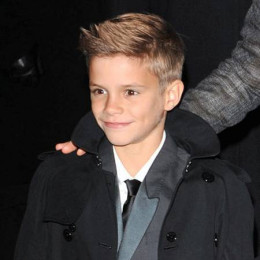 He is the second son of famous soccer star David Beckham and former pop artist Victoria Beckham. He has three siblings including two brothers and a sister. He is also godson of Elton John and Elizabeth Hurley. When he was child he suffered from epilepsy for which his caring mother Victoria prevented him from coming in the photographer’s camera flashes.

Talking about his personal life he is too small to get married and he is still single. There has been no news regarding his relationship with anyone. He has been starred as a star of Burberry's 2014 festive campaign. By his looks we can guess he resembles more like his father. Currently he is residing in Los Angeles with his parents and two brothers.