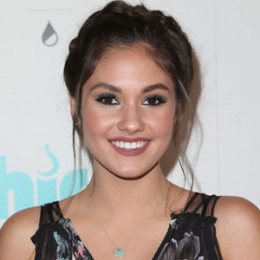 Ronni Hawk is an American actress who is mostly known for her role as Rachel Diaz in Stuck in the Middle. She has acted in numerous films and has done national commercials for Bank of America, Kentucky Fried Chicken, Target, and Kohls.

Ronni was born on September 9, 1999, in Boca Raton, Florida to Ronald Hawk and Bambi Hawk. She has two sisters Ashlyn Hawk and Katy Hawk and two brothers Ben Hawk and Jared Hawk.

She was originally from Delray Beach, Florida. At the age of five, Hawk attended ballet dance classes.  At the age of twelve Hawk was seen for the first time in advertising campaigns for Kentucky Fried Chicken.

Ronni Hawk began practicing dance in a theater from the age of five. She started playing commercials and advertisements when she was at the age of Twelve.

Hawk has performed in numerous nutcrackers and shows at Bak School of the Arts. At the age of 10, she pursued her modeling career.

At first, she acted in many commercials for Bank of America, AT & T, Kohl's Bealls and Target. She found her dream to be an actress when she met two acting coaches in Los Angeles.

Ronni is an actress mostly known for "The Dancer & The Boy" and "Found" and "Session One."

Ronni Hawk is in a romantic relationship with her boyfriend, Miles Fallon since a long time. The duo often shares their cute PDA on Instagram.

Happy Valentine’s Day your humor is literally the only thing keeping me in shape, your undying support keeps me going and you push me to be a better person (plus you really get down and dirty for them angles sooooooo)

Previously, there was a rumor that her boyfriend is Aaron Reiser after she posted a video of herself holding hands with him. She wrote:

"I love getting to travel around with you."

Aaron made it clear through his Instagram after replying to the comments of his fans and explaining that Ronni is just his best friend.

She is crazy about pets and has two dogs, Chanel and Paley and a cat named Lila. Hawk loves to donate her time to animal rescue shelters.

Ronni is one of the promising actresses in Hollywood. She is still very young and yet to make a mark in the industry. She has acted in a handful of series and movies from which she must have earned a good salary.