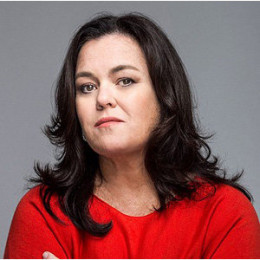 Winner of Primetime Emmy Awards for Outstanding Variety, Music or Comedy Special, Rosie O'Donnell is a comedian and an actress from United States. She is known for her role in the movies like Exit to Eden, Beautiful Girls, Harriet the Spy and many more. She is the daughter of homemaker Roseann Teresa and Edward Joseph O'Donnell, an electrical engineer. She earned her high school graduation from Boston University. She started her comedy career when she was on the talent show Star Search in 1984 and film debut in 1992 by portraying the role of Doris Murphy in film A League of Their Own.

In February 2002, she revealed that she is lesbian indeed. She announced she is lesbian at the Ovarian Cancer Research benefit at Caroline's Comedy Club. She was previously married to Kelli Carpenter, a former Nickelodeon marketing executive. She is also an established producer and is famous for her work in the movie Pursuit of Equality. They had four children together. Recently she was married to Michelle Rounds, an executive-search consultant. However they ended this relationship into divorce.

On 26th of February 2004, Rosie got married to Kelli Carpenter. Kelli Carpenter is a former Nickelodeon marketing executive. She is also an established producer and is famous for her work in the movie Pursuit of Equality. They had four children together. They annulled their married life in 2004.

In 2011, Rosie was seen having affairs with Michelle Rounds. Michelle Rounds is an executive-search consultant. At the end of 2011, she revealed that they are engaged. They finally got married on 9th of June 2012. They adopted a daughter named Dakota in the early 2013. This married life came to an end in March 2016.