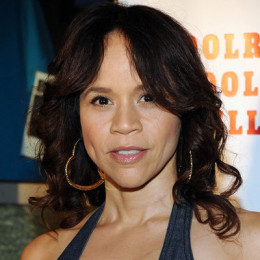 Rosa Maria Perez is a well-known American talk show host, author, dancer, actress and a choreographer. Her mother's name is Lydia Perez and father's name is Ismael Serrano. Both of her parents were married to other individuals before, but they fell in love when they met and she is the product of their love. She attended Grover Cleveland High School located in Ridgewood, New York, and later transferred to Los Angeles City College in Los Angeles, California.

Rosie Perez was first married to a writer and a director Seth Zvi Rosenfeld (from 1999-2001) with whom she stayed for a long time and got separated. After her previous broken relationship, she again got hooked up with another guy.

She is now married to her love Eric Haze and is happy with him since 15 September 2013. There is a rumor of her getting into a fight with a woman during a show. As per the sources, during a show, she fought with a lady at the backstage. She has no children yet.

She received a break in her career in Spike Lee's Do the Right Thing in 1989. She was nominated for the Academy Award for Best Supporting Actress for her role in Fearless in 1993.

He is a filmmaker and a writer. He had his wife play in the movie 'A Brother's Kiss'.

He is an artist. They knew each other for a long time and started dating, which finally resulted into a successful marriage.