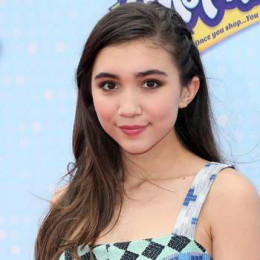 Rowan Eleanor Blanchard is a talented actress, best known to the public for her portrayal as Riley Matthews on the Disney Channel series Girl Meets World. She started acting at the age of five and till now has appeared on films like Spy Kids: All the Time in the World in 4D, Invisible Sister and The Back-up Plan. She was born to yoga instructors, Elizabeth and Mark Blanchard-Boulbol.

Rowan Blanchard was born on 14 October 2001 in Los Angeles, California to Elizabeth and Mark Blanchard-Boulbol.

She has two younger siblings; a brother named Shane Blanchard and a sister Carmen.

Blanchard started her career at five years of age.

She is famous for her role as Riley Matthews on the Disney Channel series Girl Meets World.

Some of her recent TV appearances include The Goldbergs, Neo Yokio, and Splitting Up Together.

Accounting her personal life, she is yet unmarried as she is just a teenaged girl and is too young for this. But despite being so young she has already been through a relationship.

In the year 2015, she was in a relationship with a Canadian actor but currently is single. As she is so pretty, she was often romantically linked with actors like Peyton Meyer and Teo Halm, however, this issue was never clarified openly.