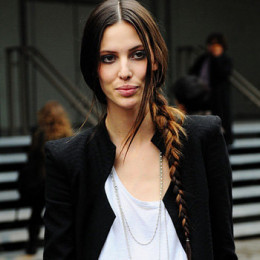 An American model who is better known as the model who signed for agencies like NEXT Model Management, Chic Management and Modelwerk. She is daughter to graphic designer and illustrator Alan Aldridge and playmate Laura Lyons. She also has a sister named Lily Aldridge who is also model for Victoria's Secret Angel. Her sister Lily played main role in introducing her to the fashion world in 2005. Later in 2008 she was featured as the face of Coach. She has been featured as the face of many popular brands like face of Marc by Marc Jacobs, ck one cosmetics. She has worked in advertisement campaign of brands like Calvin Klein, Theory, Urban Outfitters, Valentino, Carolina Herrera, Nordstrom, Just Cavalli, Marc Jacobs, Zac Posen, Lacoste and Emporio Armani. Beside modelling she is also member of band named "Texture".

Talking about her relationship status she has not married yet. Looking at her relationship history currently she seems to be single. Before she was single she used to date an American musician and fashion designer. After dating for few months the couple ended their relationship. Since she is currently focusing in building her career may be that may be the reason behind her breakup.