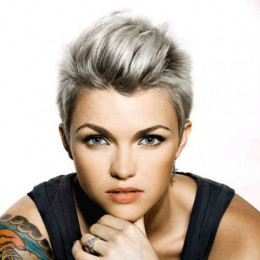 An Australian versatile model, DJ, actress, television presenter, recording artist who is better known as the host of an Australian talk show called The 7pm Project. She is daughter to single mother Katia Langenheim. She has stated that her mother was her inspiration throughout her career. In 2002 she started her career by joining the Girlfriend model search. In 2010 she became the designer of collection named Milk and Honey. She released her first debut single "Guilty Pleasure" in 2012. She also starred as judge in episode of "Media Virgins", of Australia's Next Top Model. she started her career as actress starring in Australian film Suite for Fleur. Beside in media she is also popular in YouTube and her official YouTube channel has got more than 27,000 subscribers and over 2,000,000 views. In 2009 she was awarded with ASTRA Award for Favourite Female Personality.

Talking about her personal life, she came out as lesbian when she was just 12 years old. According to her, she used to be bullied and verbally abused in her school by other kids due to which she even tried a suicide attempt. Her relationship has always been subject to media attention. She has dated no. of girls including models and actress. She was even briefly engaged with one of her model girlfriend but later they called off their engagement. She was all over headlines after she was reported of kissing an Australian supermodel in pool party. Currently she is engaged to her new girlfriend who is cousin of model Sophie Dahl. Rose also worked on Orange Is the New Black with co-stars, Uzo Aduba.