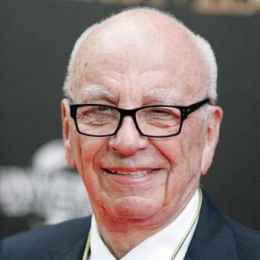 Keith Rupert Murdoch is an American actor as well as a media proprietor. He is the son of Elisabeth Murdoch and Keith Murdoch. He is of Irish, Scottish as well as of English ancestry. He is the founder, CEO as well as a chairman of the global media, News Corporation. He went to Geelong Grammar School. After that he had studied Philosophy, Economics and also Politics at Worcester College.

Murdoch is a very romantic nature man as he has married four times. From his first wife he has a child. His first marriage was at the age of 23. After eleven years of marriage he divorced his wife and in the same year got married second time. From his second wife he has three children and from his third wife he has two children but from his recent wife he has no child yet.

He first got married at the age of 23. The couple had started dating in 1955. But after eleven years of marriage they got divorced and the reason is not known.

He got married third time when he was 68 years old. He married to a Chinese girl. She was a newly appointed vice president of his STAR TV. Again after thirteen years of marriage they got separated. He has two children from his third wife.

Currently he is married with a former model as well as an actress. Yet he has no child with her. After dating for three months he got married to her

His eldest child is a daughter from his first wife. In 2011 she has been appointed to the board of Times Newspaper Ltd.

His second child is also a daughter. His second daughter is from his second wife. She is a TV producer. She is an Australian television industry as well as international media executive.

His fourth child is also a son. He is youngest son from his third wife Anna. He is a Chief Executive Officer in 21st Century Fox. He is also the former chairman and chief executive of News Corp., Europe and Asia.

His fifth child is from his third wife Wendi and she is a daughter. She is very small to pursue her career and there is no more information about. She might be attending school presently.

His last child is also from his third wife Wendi and she is a daughter. There is no much information about her as she is a child yet. Presently she might be attending schools.