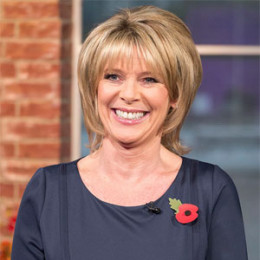 Ruth Langsford is an anchor on ITV's lunchtime chat shows 'Loose Women'. She joined the Loose Women panel as a regular anchor when the series returned in January 2014.She is also the ambassador of the Alzheimer's Society.

A television presenter, Ruth Langsford was born on 17th March 1960. She is a daughter of Joan Langsford and Dennis Langsford. She has a sibling named Julia Johnson. Langsford attended Saltash school Wearde.

Ruth Langsford started her career as an announcer and newscaster with ITV regional station named TSW. From 1999 until 2002, she was a regular panelist on ITV's daytime chat show 'Loose Women.'

In 2000, Langford worked as a guest presenter on 'This Morning.'She was one of the main presenters on the now defunct 'TV Travel Shop,' air from April 1998 until March 2005.

In 2004, Langsford narrated the television series called 'Zoo Story.'She was a contestant on Marco's Kitchen Burnout in 2010 and competed in 'Born to Shine' in 2011.

In 2014, Langsford and Eamonn Holmes co-hosted ten episodes of the ITV teatime quiz show called 'Gift Wrapped.'Since 2015, Ruth and her husband Holmes have presented Channel 5 series 'How the Other Half Lives,' a second series airing in 2016.

Ruth Langsford and her husband Eamonn Holmes, a journalist, and broadcaster from Northern Ireland, best known for presenting 'Sky News Sunrise' married in 2010. The couple has a son named Jack Holmes born on 26th February 2002.

Ruth Langsford is an ambassador for Alzheimer's Society. She became the brand ambassador for Playtex in 2011. In November 2011, she hosted a ladies lunch charity event in Manchester to raise money for 'The Christie & Francis House'.

Since 2012, she and Eamonn Holmes have been celebrity patrons of the 'Dogs Trust' charity, to raise awareness about the disease Langsford and Holmes with other famous faces starred in a Dementia Friends TV advertisement campaign in 2014.

Ruth Langsford’s net worth is estimated to be around $5 Million. She has worked for reputed channels like BBC, ITV as a host. Besides she also wrote columns for Woman magazine and Tesco Magazine.

The couple has a son named Jack Holmes born on 26th February 2002.