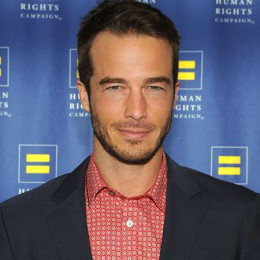 Ryan Gregg Carnes is an American actor. His first role as an actor came in 2004 when he became the ninth actor to play the role of Lucas Jones on the ABC soap opera "General Hospital". Prior to his acting work, Carnes graduated from Duke University where he was a member of the Duke marching band known as DUMB. Carnes is an accomplished drummer, having over 15 years of experience with the instruments, and has worked on a number of musical collaborations. He also had small parts on the TV shows "The loser" and "CSI: NY" and in the made-for-television movies "Thicker Than Water" and "Grand Union," as well as major roles in the motion pictures "Anderson's Cross" and "Surf School."

Ryan is best known for his gay characters: Despite playing gay characters: Lucas Jones in the soap opera "General Hospital," Justin on the nighttime drama "Desperate Housewives," and Marc Everhard in the movie "Eating Out." Carnes has stated in interviews that he is not gay. He is yet a bachelor and is single at the moment and there is no record of his past affairs. To know more about him we can follow him at @RyanCarnes1 on Twitter.

Ryan Carnes remained single unless he found a perfect match to spend his life with. He is quite secretive when it comes to sharing his love life and dating history publicly.

Carnes is currently single. He is neither spotted with any women on PDA nor romantically involved with anyone. Previously, he had a lovey-dovey relationship with a mysterious girlfriend in early 2000s.

Back in April 2005, Carnes and his sweetheart attended the 12th Annual Race to Erase MS Gala themed "Rock & Royalty to Erase MS" at the Century Plaza Hotel.

Beyond the sky' star is at his 30s and there are still a few years to marry or be in a serious relationship. Even though, Ryan had never been married in real life he feels proud to be a baby papa in reel life.

How Much Is Ryan Carnes Net Worth?

Ryan Carnes is a leading television and movie actor who possesses an estimated net worth of $5.6 million as of 2019. The average salary of an actor in the U.S. is $49,924.

Carnes earned a good sum of net worth from his acting career. As per some online sources, he earned more than $30,000 per episode from his appearances in the TV series.

The curly-haired featured in a number of television series and movies to date. He is widely popular for portraying adult Lucas Jones on the ABC soap opera General Hospital.

Ryan began his acting career in 2004, he played General Hospital from July 2004 through September 2005. Some of his highest grossing movies include Eating Out. Thicker than Water. Suicide Dolls, Beyond the SKy, etc.

Unlike other actors, Carnes brings in a thick penny from ads, endorsements, and sponsorships too. He earns $244.5 - $407.5 per ads post for amassing over 60 thousand followers on Instagram.

Ryan Carnes was born on November 21, 1982, in Pittsfield, Illinois, the USA. His birth sign is Scorpio which defines her personality as brave, passionate, resourceful who are intense and full of passion. He attended Duke University where he was a member of the Duke University Marching Band,

Carnes started his acting career in 2004 when he selected to portray Lucas Jones on the ABC soap opera General Hospital from July 2004 until September 2005. He also had a recurring role on Desperate Housewives as Justin. He starred in the 2004 film Eating Out and the 2006 film Surf School.

Some of his popular screen credit includes  Trailer Park of Terror, The Phantom, Class, Stupid Questions, Beyond the  Sky, Doctor Who, NCIS, Bones and many more.