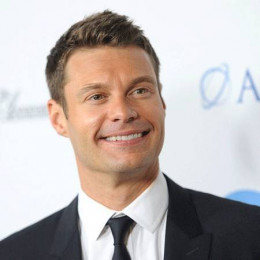 Ryan John Seacrest is an television/radio personality and producer, best known as the host of American Idol and American Top 40. He has won an Emmy for producing the ABC show, Jamie Oliver's Food Revolution. He launched the nonprofit Ryan Seacrest Foundation in 2010. He went to study journalism at University of Georgia, but he left the university and moved to Hollywood to pursue his broadcasting career. He was born to Gary Lee Seacrest, a real estate lawyer and Constance Marie, a homemaker.

Moving on to his personal life, till now he hasn't married anyone and also does not have any children. As he is so charming and famous, lots of girls have been through a serious relationship with him. He has dated long list of girls but none of them made too far with him. These days he is dating a stunning actress and model with whom he often spotted. There are no any controversy related to his personal and professional life.

Ryan ranks fourth in the highest paid TV personalities of 2017 earning around $58 million hosting from 2016-2017. If you want to know more check the video out.