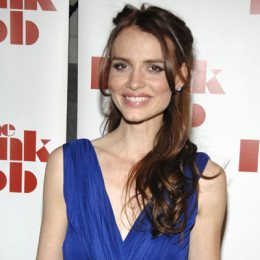 Saffron Domini Burrows is an English actress best known for her appearance in films such as In the Name of the Father, Gangster No. 1, Enigma, Troy, Reign Over Me, Wing Commander, Deep Blue Sea and Circle of Friends. She belongs to the family of socialist, her mother is a teacher and feminist and father is an architect and teacher. She was once vice-president of the National Civil Rights Movement and is known for her political activism. In 1999, she announced herself as a bi-sexual.

She has been to a huge controversy regarding her sexuality which once became a hot news all over. She has been linked to several personalities with whom she had stayed for long time. She first dated a director who starred her in his film and then she dated a married actor. After that she stayed single for a long time and finally got married to her beloved girlfriend.

She married her long term girlfriend who is also a writer for the Ellen DeGeneres Show.