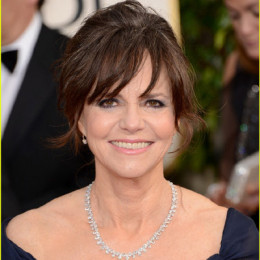 Sally Margaret Field is an American actress and director best known for her film roles in Smokey and the Bandit, Steel Magnolias , Mrs. Doubtfire , Forrest Gump, Places in the Heart, Murphy's Romance and Lincoln. She studied at Portola Middle School and later on joined Birmingham High School. Her father name is Richard Dryden Field, an Army officer and her mother name is Margaret Field, an actress. After getting divorced, her mother married stuntman and actor Jock Mahoney.

Sally Field was born on 6 November 1946 in Pasadena, California to  Margaret Field and Richard Dryden Field.

She started in her 2018 memoir that she was sexually abused as a child.

Field started her acting career playing the role of the boy-crazy surfer girl in the sitcom Gidget in 1965.

In 1977, she won an Emmy Award for playing the dramatic role of a young woman having multiple personality disorder.

She reprised the role of Amanda Wingfield in The Glass Menagerie on Broadway at the Belasco Theatre in 2017.

She published her memoir, In Pieces in September 2018.

Field has an estimated net worth of about $55 million as of December 2018.

She has been linked with many popular personalities. She first married to a director Steven Craig in 1968 and then she broke up her relationship with him in 1975.

The couple together had two sons Peter Craig and Eli Craig who now are novelist and actor, director.

After that, she dated her co-star Burt Reynolds from the movie Smokey and the Bandit for a long time and due to some marital issues, they got separated. And then she again married another man with whom she has a son. They didn't last long so they got separated.

Later, she married her second husband Alan Greisman in 1984. The two have a son named Samuel Greisman born in 1987. The couple divorced in 1993.

She was diagnosed with osteoporosis in 2005.

Also, she is an advocate for gay rights. She won the Human Rights Campaign's Ally for Equality Award in 2012. Her youngest son Sam is openly gay.

She married her boyfriend with whom she dated at first and got married but her relationship didn't last long.

She married her boyfriend after her breakup from other relationship. The couple together have a son.

He is a novelist and is working hard for his stable career. He is seen sometimes with his mother.

He is an actor director and has played several movies. He is busy in his own world.

He is the youngest and is the most closest son to his mother. He declared himself as a Gay.