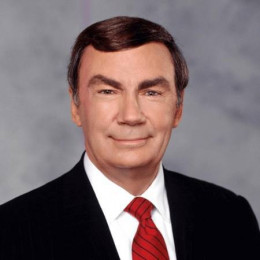 Samuel Andrew Donaldson, Jr, aka "Sam Donaldson" is a journalist and news anchor currently working at ABC News. He received the 1989 Broadcaster of the Year award from the National Press Foundation. In 1959, he began his broadcasting career at KRLD-TV, Dallas. He earned his Bachelor's degree from Texas Western College. He was born to Chloe, a school teacher, and Samuel Donaldson, a farmer.

Talking about his personal life, till date he has been married thrice. He has divorced all three wives and currently,  Sam is single. He has four children: one from the first marriage and three from the second marriage. He ended up his third marriage with no kids. Despite that, there is no record of his affairs. Controversy arose when he got arrested for driving under the influence of alcohol. Later all the charges were dropped due to not having probable cause for the arrest.

Samuel Andrew Donaldson, Jr was born on March 11, 1934,  to Chloe, a school teacher, and Samuel Donaldson, a farmer. Though he was born in EI Paso, he was raised in Chamberio, New Mexico.

He is best known as the former network's White House Correspondent and as a co-anchor of This Week.

Donaldson began his career as an artillery officer in the United States Army where he served from 1956 to 1959.

Following his military service, later he was hired by KRLD-TV. In 1961, he joined WTOP-TV and covered both local and national stories.

On October 1967, he joined ABC News as a Washington correspondent. He reported many significant events;  Vietnam War and the Watergate hearings. He also covered the presidential campaigns of George McGovern in 1972 and Jimmy Carter in 1976.

He was honored with many prestigious awards such as; Emmy's for four times, three Peabodys, Edward R. Murrow Award, Paul White Award and many more.

Currently, Sam Donaldson is possibly single at the moment but it doesn't mean he never had in a relationship. He was previously married for three times.

He has been married to Sandra Martorelli Donaldson in 2014 but due to some personal issue, the couple had divorced in the same year. They used to live in Albuquerque, New Mexico.

Sam fathered four children; Samuel Donaldson III, Jennifer, Thomas and Robert Donaldson from his two marriage,  one from the first marriage and three from the second marriage.

In 2012, after being together for almost 30 years, Donaldson separated from his wife Jan, a former television reporter.

Sam has earned a massive net worth from his journalism and military career as he succeeded to made $40 million. He is considered as one of the richest media personality. Despite this, he is living a lavishing life with his children.

She is the first wife of Sam whose personal details are still unknown. She gave birth to a kid with her husband.

She is the second wife of Sam who gave birth to three children. Personal details about her has not been disclosed yet.

She is a journalist, television reporter. The couple ended up their thirty years of marital relation.

He was born healthy. Detail about his birthday and his mother are still unknown.

She was born safe and sound. Her current status is unknown.

Details about his birthday is unknown. He was born safe and sound.

He was born healthy. His current status and other details are still unknown.