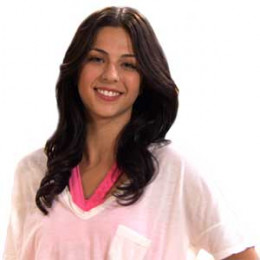 Samantha Grecchi is a Canadian actress and dancer. She has appeared on the Family Channel Famous series The Next Step and in the documentary, The Next Step Live: The Movie. She has also appeared in Lost & Found Music studio. She has opened her own dance studio. Her favorite singer is Beyonce and Selena Gomez.

Samantha Grecchi a Canadian actress and dancer, born on August 18, 1994, in Schomberg, Ontario, Canada. She is a Canadian by nationality and comes from Mexican, Puerto Rican, and Irish decent. She was raised along with her brother Nicholas and sisters Hailey and Taylor.

From the early age, she was interested in dancing. So at the age of six, she enrolled at Art and Soul Dance Company in Kleinburg. Her nickname is Sam.

Samantha's big breakthrough in entertainment field came when she got a chance to play the role of Stephania on the Family Channel famous series The Next Step, where she shared the screen with Tordjman. Her excellent acting skills impressed many fans and critics.

In 2015 she also appeared in the documentary The Next Step Live: The Movie, which was released on 27 June 2015. She also made an appearance in Lost & Found Music Studio in the same year. She also covered the song “ Play the Game.”  She has also opened her own dance studio called Epic Dance Company.

The Canadian actress and dancer Samantha Grecchi is not married yet. However, she is in love relation with a dashing guy name Nick Gray. As per her Instagram post, pics, and caption, it was found that she has been in a relationship with Nick from a long though she hasn’t revealed from when they started dating.

Currently, the couple seems to be living a happy life together and maybe soon they will tie the knot and have children.

As of 2017, Grecchi's net worth is under review, but she seems to be making a decent amount of salary from her dancing and acting career.

She loves Jazz and Contemporary dancing and hopes to continue acting and dancing in the future.