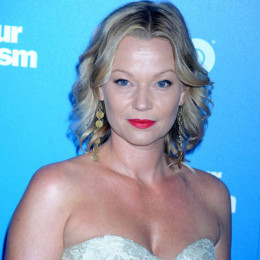 Samantha Mathis is an American actress and model best known for her roles in the films like Broken Arrow, Little Women, American Psycho, The American President, and Atlas Shrugged: Part II. She is the daughter of actress Bibi Besch and of Donald Mathis. She acted with her mother in a commercial for baby products, which was her first acting job. In 1995, she was nominated for a Young Artist Award for Best Young Actress starring in a Motion Picture for This Is My Life.

Talking about her personal life, she has not been married yet. She has been in a relationship with a lot of guys and has millions of fan followers by the side as well.

She first dated her co-star from the movie Broken Arrow and the couple was often spotted together. There was once a rumor of her getting engaged with him but due to some conflict, the couple broke up instead. After that, she dated a lot of popular faces of Hollywood film industry but never made it to a successful marriage.

The actress opened up about the death of her ex-boyfriend River Phoenix for the first time since he died outside the Viper Room in October 2018. He lost his life on 31 October 1993 due to drug overdose and Mathis opened the thing 25 years after the tragic incident.

“I knew something was wrong that night, something I didn’t understand. I didn’t see anyone doing drugs but he was high in a way that made me feel uncomfortable – I was in way over my head."

"He said to me: ‘Oh, there are some people playing music tonight in the club who want me to play with them – that’s OK, right?’. Forty-five minutes later, he was dead."

Mathis has a net worth of about $4 million at present.

She made her debut in movie Pump Up the Volume in 1990.