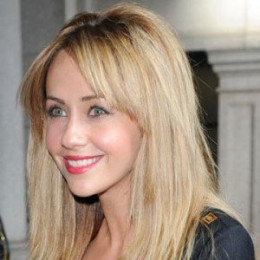 An English actress, Samia Ghadie is a married person. She married to French professional ice skater Sylvain Longchambon. The couple married in August 2106.She is popular from a soap opera movie named Coronation ,she has a character of Maria Connor. Samia is a daughter of Joseph, a shop owner from French-Lebanese and English actress Patsy Ghadie. She began her acting career at the age of eleven.

She first married to a property developer, in St Philip's Church, Matt Smith .The couple married on September 2005 and divorced on 4th January 2011.

She married to French professional ice skater Sylvain Longchambon. The couple married in August 2o16.The couple has one son.

The couple has a daughter named Freya Ghadie,born on 19th October 2009.

The couple has a son named Joseph Longchambon, born on 24 September 2015.