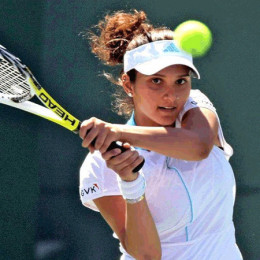 An Indian professional tennis player who has held number one rankings in both singles and doubles play. She is daughter to Imran Mirza and his wife Naseema Mirza. She completed her graduation from St. Mary's College from where she earned honorary degree of Doctor of Letters. Beside playing tennis she is also good swimmer. She started playing tennis from an early age of 6. In 2003 she began to play as profession tennis player after winning 2003 Wimbledon Championships Girls' Doubles title. She is also one of the highest-paid and high-profile athletes in India. She is third indian woman to get victory win in a round at a Grand Slam tournament. In 2005 Times magazine named in the list of "50 Heroes of Asia".

She was criticized by Indian Muslim community for her dress up in small skirt in tennis court and considered it as "un-Islamic" and "corrupting". Talking about her marital status she is already tied in knot with her longtime boyfriend who is a Pakistani cricketer. Prior to be getting married to him, she was engaged to a millionaire businessman but the engagement was called off shortly due to some personal reasons. She was also rumored to be dating famous Indian actor Sahid Kapoor but the rumor was never officially confirmed. She has not been a biological mother yet.

He is a Pakistani cricketer. Their marriage was performed in Pakistani wedding customs at the Taj Krishna Hotel in Hyderabad.