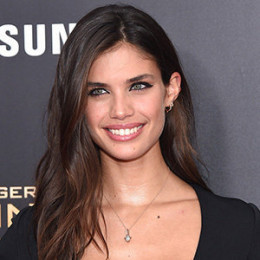 Sara Sampaio, a Portuguese fashion model, is currently dating Oliver Ripley. She is best known for being a Victoria’s Secret Angel. Sara Sampaio was spotted in 2007 at a local model contest, at the age of fifteen, but that time Sara was not allowed to compete in modeling competitions until the age of sixteen. At the age of sixteen, she won a hair modeling contest called "Cabelos Pantene" in 2007. She has appeared in magazines such as Sports Illustrated, Glamour, Elle, Vogue, and GQ.

Sara Sampaio was dating River Viiperi for a few months in 2012. After breaking up with the first boyfriend, she started dating Alex DeLeon in 2013, but the couple broke up in 2014. She was rumored to be dating Harry Styles, the popular One Direction star, in June 2015 but they were rumored to have already separated around the end of 2015. Since September 2015, Sara Sampaio has been dating Oliver Ripley.