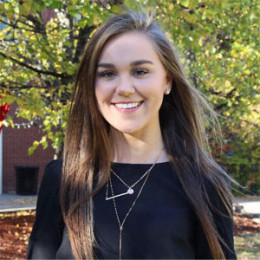 YouTube sensation, Sarah Betts is an Internet personality who earned popularity in a short period of time. She is best known for her self-titled YouTube channel, Sarah Betts which have millions of subscribers. She uploaded her first video, "Follow Us Around QUEENSLAND 2014!" in July 2014. She is active on YouTube since January 2013, & she first uploaded her video in July 2014.

Sarah Betts was born on 22nd October 1996, in Gold Coast, Australia. Her birth sign is Libra. Regarding her nationality, she is Australian and belongs to Caucasian ethnicity.

Her channel, Sarah Betts is a beauty vlog. She has uploaded the morning and night routine videos with tips and tricks for hairstyles on her channel.

Betts often posted the videos along with her boyfriend, Foster such as Boyfriend Buys Back To School Outfits For Girlfriend!, BOYFRIEND BUYS OUTFITS FOR GIRLFRIEND! Shopping, GIRLFRIEND BUYS BOYFRIENDS OUTFITS and many more.

Betts uploads new videos in every Sunday and Thursday for her fans. Her channel has more than millions of subscribers. In August 2016, she uploaded a video called, My Morning Routine For School! Back to School 2016. The video became the most watched video of her with nearly 2 million viewers.

Sarah Betts, age, 21 is unmarried and has no children. She is in a romantic relationship with her boyfriend, Kane Foster. Her boyfriend is also one of the popular Australian YouTuber. The duo often uploads their collaborative videos on their respective channels.

The duo lived together in Gold Coast, Australia and shared a healthy relationship. As per some online sources, they are together since 2014. She has posted many pictures with her boyfriend on her Instagram account. The couple seems happy together.

Betts is quite popular on social sites as well. She has many followers on her Instagram account and has more than thousands of followers on Twitter.

Betts has earned a massive popularity in short span of her career as an Australian YouTuber. Besides making the name, she also succeeded to receive an enormous sum of wealth. Her estimated net worth is $0.5 million. Some online sources also revealed her net worth to be $850,000.