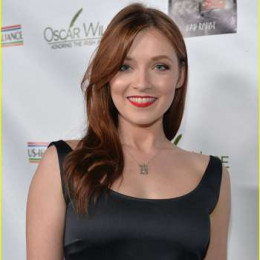 Pretty and aspiring actress Sarah Lee Bolger is an Irish actress best known for her roles in the films 'In America', 'StormBreaker' and 'The Spiderwick Chronics', as well as guest starring as Princess Aurora in Once Upon a Time. She is the daughter of Monica and Derek Bolger, who is a butcher. She learned acting from The Young People's Theatre School in Dublin and attended Loreto High School, Beaufort. She has own 2011 Irish Films and Television Awards for actress in a supporting role and 2009 Berlin Film festival also for best supporting actress. She was selected to be in photographer Kevin's project "The Face of Ireland.

Getting into her personal life, Sarah was once linked to a stunning actor Freddie Highmore. He was one year younger than Sarah. So after three years of relationship due to some personal dispute they moved apart. Three years after her breakup she again established a relation with another dashing actor with whom she is still dating. She now seems to be very happy with this guy and possibility is there that they would turn this relation into marital status. To more about her life and affairs follow her at @SarahBolger on twitter.