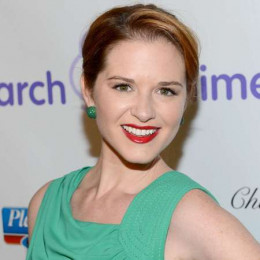 She is an American actress, best known for portraying Dr. April Kepner in the ABC medical drama series Grey's Anatomy and as Hannah Rogers in family drama series Everwood. She began her acting career in 1997, while attending High School. She is the daughter of Dr. Jeannie Drew, a biology teacher in Manhattan and Charles Drew, a pastor. In 2002, she earned a bachelor's degree in drama from the University of Virginia.

Accounitng her personal life, she is a happily married woman. She has been enjoying her marital relationship since 2002. Her husband is a lecturer at UCLA. The two are perfectly made for each other as they have a great chemistry and mutual understanding, so there is no point on talking about their divorce. The couple is blessed with two children: a son and a daughter. Talking about her religion, she is a Presbyterian Christian.

He is the one and only husband of Sarah, who is a lecturer at UCLA. They have raised a son and a daughter from their marriage.

He is the eldest child and only son born to Sarah.

She is the only daughter of Sarah, who was born healthy weighing 6 lbs., 14 oz.