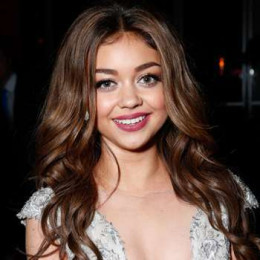 Sarah Jane Hyland is a talented actress, well known to the public as Haley Dunphy of the ABC sitcom Modern Family, for which she has received critical acclaim and several nominations. Some of her notable film credit includes Struck by Lightning, Scary Movie 5, Blind Date, Annie and Vampire Academy. She landed her first acting role at the age of five portraying in Private Parts. Her parents Melissa Canaday and Edward James Hyland, both are actors by profession.

Accounting her personal life, she is yet unmarried but currently is in a serious relationship with her Vampire Academy's co-star. The two are dating since 2015 and are often spotted together at various events and places. As she is so gorgeous and popular, she have been through several romantic dates and heartbreaking tragedies. To know more about her we can stay connected to her on Twitter @Sarah_Hyland.