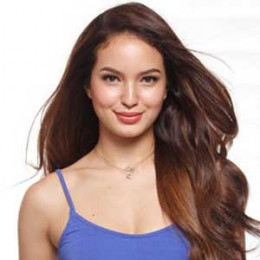 Swiss-Filipino actress and television personality, Sarah Lahbati widely recognized as "Ultimate Female Survivor" in Philippine reality talent competition StarStruck. The Gorgeous actress, Sarah is married to handsome Richard Gutierrez, a Filipino actor. The couple dated for four years before tying the knot. Together they have a son named Zion Gutierrez. Previously, she had an affair, but all her past relations couldn't last for long. The famous actress is now happily living with his husband and his adorable son, Zion.

Sarah Alzol Lahbati, now famous as Sarah Lahbati was born on 9 October 1993 in Geneva, Switzerland. She was raised by his father Abdel Lahbati who belongs to Swiss-Moroccan and his mother Esther Lahbati, a Swiss-Filipina descent.

She has two siblings, a half-brother from his stepmother and a younger brother. Lahbati belongs to Swiss nationality, and her ethnicity is white.

She studied at Geneva and later transferred to the Philippines. Sarah continued her studies in the Philippines at the Immaculate Concepcion Academy which is in Cavite.

Charismatic actress, Sarah Lahbati made her first television appearance from Philippine reality talent competition StarStruck in 2009. In 2010, she made her strong impression on the big screen with her debut movie White House, a Filipino supernatural horror film.

Gorgeous television personality Sarah got her first leading role as Topbills in drama series, Kokak. In 2011, She also starred in different popular GMA series such as Love Bugs presenting, Exchange of Heart, Little Star, Koreana & Time of My Life.

Later in 2012, Sarah appeared in Filipino comedy movie Boy Pick-Up: The Movie, and since then she has actively played in many movies of different genre. Currently, she played the movie Darna as the character of Valentina and is busy with his upcoming releases.

Beautiful and immensely talented Sarah previously was in a relation with a couple of handsome guys like Filipino actor Enzo Pineda with whom she had an affair for nearly one year.

Later same year after her breakup with Enzo Pineda she was also linked with other two Filipino actors Martin Escudero and Derrick Monasterio. However, her past relationship couldn't last long.

In the year 2012, she found her soul mate Richard Gutierrez, a Filipino actor and dated him for nearly four years. He turned his love affair into a married relationship and together the pair has a son named Zion Gutierrez.

Currently, the beautiful couple seems very satisfied with their relationship. Sarah has posted many cute pictures with her husband on Instagram, and it looks like their love is just getting stronger. Lahbati currently resides in Switzerland with her family.

Widely popular actress Sarah performed in many hit drama series and movies in her career and got name and fame from Filipino movies.

She also has several restaurants (the “Fat Lahbati Burger” chain) in Manila, a Football Team (the “Geneva Angels”). She launched her own brand of Vodka (Pure Wonderlahbati-Philippines) and has juniors market with a top-selling perfume (With Love from Sarah). Her fashion line is called “Sarah Lahbati Seduction”.

She is regarded as one of the top 10 highest-paid actresses of the current time. As of 2017, her current estimated net worth is to be around $82 million dollars.

Sarah and Richard dated for four years before finally deciding to settle down.They married in the year 2012.

Richard and Sarah have a baby boy named Zion Gutierrez. He is the only son of the couple.