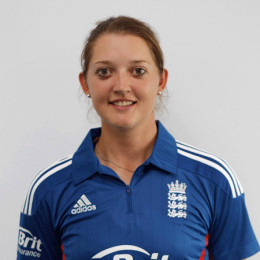 Sarah Jane Taylor, 28, is a professional cricketer, who serves as a wicketkeeper-batsman for England National Cricket team. She is widely known for her free-flowing stroke play. Taylor has won 2013 T20I Women's Cricketer of the Year and is one of the first tranches of 18 ECB central contracts for women players. Taylor is possibly single at the moment. She succeeds to earn a good sum of net worth from her cricket career.

Sarah Jane Taylor was born on May 20, 1989, in Whitechapel, London, England to Brian Taylor and Caroline Taylor. Her birth sign is Taurus.

Nationality-wise, she is British and belongs to the Caucasian ethnicity. She is an English wicketkeeper-batsman who is best known for her free-flowing stroke play.

In 2008, Taylor was a member of the England team which retained the Ashes in Australia. She also plays county cricket for Sussex during her initial phase of career. Later, Taylor played for Brighton College boy's team which caused some controversy within the MCC.In 2008, she became the youngest woman cricketer to scores 1000 runs in One Day Internationals.

On June 30, 2009, in the 2nd One Day International, she scored 120 at a run-a-ball. She was the opener for England in the World cup and Twenty/20 World Championship. Besides this, consecutively in 2012 and 2013, her team succeeds to won T20I Women's Cricketer of the Year. Taylor was named as the ICC Women's ODI Cricketer of the Year in 2014.

In May 2016, Taylor announced she was battling with anxiety which caused poor performance in her cricket career. In April 2017 she resumed playing, and in June she was selected for the  2017 Women's Cricket World Cup.

Taylor is reportedly single at the present. She is one of those cricketers who prefers to maintain distance with media regarding their personal life. Taylor isn't married and has no husband and children.

She hasn't shared any details regarding her past affairs and other such relevant activities. Till now there is no such bad rumors and controversy related to her personal and professional life. However, once she was linked up with Indian cricketer, Ravindra Jadeja after the t20 world cup 2014 but she denies the rumors.

She is a huge football fan and is a supporter of Arsenal football club.

Usually, the yearly salary of female English cricketer is £50,000 a year, and she also gets paid around this figure. Besides this, Women cricketer salary was increased by 50% from 2016.