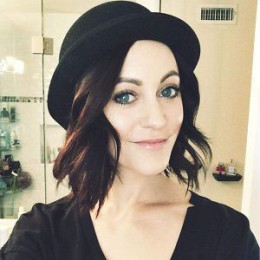 American citizen, Sarah Urie is popularly known as the wife, Brendon Urie. Her husband is the lead vocalist of the band, Panic! At the Disco.

The couple started dating only after a short meeting. The couple got engaged in 2011 and married after two years in a fairytale ceremony.

Sarah Urie calls herself as a skin care enthusiast who provides various information about skin and hair products on her social media.

Sarah Urie was born Sarah Orzechowski on 23rd February 1987 in Detroit, Michigan. Urie is Pisces. She is American as per her nationality and as far as her ethnicity is concerned, she is White. Her parents raised her with her brother, Steve Orzechowski.

Sarah Urie has no such definite professional life but plays a prominent role in her husband’s career. Her husband is a singer and a musician who is best known as the lead vocalist of the band, Panic! At the Disco. Urie became one of the major influencers in her husband’s album, Death of a Bachelor.

Sarah Urie has no specific professional life so, her net worth is not mentioned whereas, her husband has an estimated net worth of $4 million.

Sarah Urie is a married woman. Urie tied the knot to her longtime boyfriend, Brandon Urie on 27th April 2013. Their wedding ceremony took place at the Saddlerock Ranch in Malibu. They were engaged back in 2011. She wore a Vera Wang gown whereas her husband wore a black suit in the ceremony. She explained the event as:

''It was very important for us to have this day reflect our love for one another, something beautiful, romantic, whimsical, and unique. Every detail really came together the day off and we became very emotional when we finally got to see it all at once. We were honestly speechless at how beautiful everything was – it truly felt like a real-life fairy tale.''

The couple first met while they were on a tour but were not together. They again met with the help of their mutual friend and eventually started dating.

The pair has no children yet and is having a healthy relationship to date. They reside in Los Angeles, California. They moved out of their home to an undisclosed location in February 2017. Her husband said that he moved to get away from excessive attention from his fans.

On 27th April 2013, Sarah Urie married her boyfriend, Brendon Urie at the Saddlerock Ranch in Malibu. The couple got engaged in 2011.